David Essman said that a public figure dying is like a snow day for bad editorial cartoonists. If this is true (and it is) then I guess widely-covered disasters are half days. Any time a celebrity dies, I prepare myself for an onslaught of bad to awful tributes full of crying inanimate objects and the same shitty joke set at the Pearly Gates repeated endlessly. So now, after the shocking death of a man with cancer, let's dive right in...
( Collapse )

Just in time for the end of nice weather, I got myself a bicycle!

It was made by this guy. He's nice as hell and excessively good at what he does.

Also, my radio show's moved to Wednesday night (technically Thursday morning) at 1:00 am for those of you who give a crap.

I went to the zoo and saw there were a hundred people there just like me. They all wanted to look at entertaining animals and feed the sea lions and give candy to the otters even though they were not supposed to. There were a hundred people not like me, too. The beleaguered parents, wardens of a three-foot radius as their offspring squirmed and squinted in the midday sun. Three hundred children screamed like ten thousand cicadas at their parents, at the heat, at the lack of entertaining elephants and exotic birds. They screamed for sandwiches and ice cream and soda from the vending machines. They screamed for impossibly expensive plastic dinosaurs and stuffed giraffes from the gift shop. They cried and stomped and howled and leaked tears like little broken water mains until they were appeased or shamed into a brooding silence that evaporated into the atmosphere and ruined yet another beautiful spring day.

I think you should all listen to my radio show. The first episode was broadcast last week, and it was great. Well, it was great for me at least. It's on 90.3 FM, WZBC every Friday from 3 to 5 pm EST. This is, apparently, the absolute best time slot in the entire lineup and I landed it by pure luck. Way to go, me.

Anyway, if you're outside the Boston area you can listen to it online here:
http://www.wzbc.org/listen.html

So, uh, the Tea Party Express rolled into Boston today. Sarah Palin spoke, but I was too late to catch that. Predictably, lots of middle-aged white people who love flags showed up to rally against perceived threats of socialism in a public park. Of course, it wouldn't be Boston without a sizable number of creative liberal counter-protests. 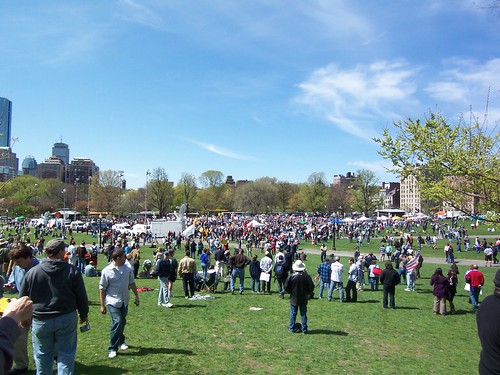 I'm pretty tired of the cultural fetishization of childhood video games among people in their twenties and early thirties. Recently a friend of mine was talking about how she knows someone who got a Zelda tattoo. The other day I saw someone with a tattoo of Luigi in all his 8-bit glory. Those of you know me know I am not generally a fan of tattoos. Well, I am really not a fan of cultural reference tattoos, and I am especially really not a fan of when those references are video games. Wow, you were a child in the late 80s and/or early 90s and played a lot of Nintendo? NO WAY! Me too! Let me tell you about the fact I did the same thing millions of other people my age did by permanently searing its likeness onto my flesh!

So in the age of Xbox 360, what's next? Will these people spend their mid-life crises modding their motorcycle helmets to look like Master Chief? Will men start sporting goatees and black, thick-framed glasses in order to appear more like Gordon Freeman? Probably not, as they'll likely be spending those years quitely crying themselves to sleep or saving up for another tattoo removal.

Another question that springs to mind: Why limit yourself to video games? There is a whole range of things you and millions of others did as a child that you can co-opt into body art due to your own personal lack of creativity or meaningful symbolism.
"Hey dude, what the hell is that red stripe you have up and down your neck?"
"Oh, that? Well, you know how 'Fruit by the Foot' was totally awesome when we were kids? I got it tattooed onto my side!"
"What?"
"Yeah! The whole thing unrolls down to my crotch! Am I cool or what?!? NOSTALGIA!!!"

First, I've put together a video:

I feel like it's only a matter of time before all airline passengers look something like this: